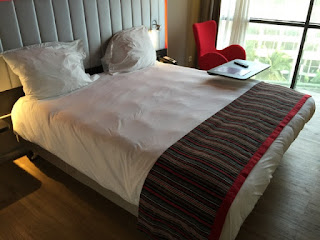 Formerly known as Okoume Palace, Park Inn Libreville is a brand new hotel with Radisson’s standards located between the international airport and the city center of the Gabonese capital. It felt like the property could have been anywhere in the world, which is a good thing in a country like Gabon. To have a feeling of home with it’s modern Radisson design and complimentary Wi-Fi made a big difference for me.

West- and Central Africa is often very expensive when it comes to comfortable hotels, but Park Inn Libreville is good value for what you get. It is much better than many so-called 5-star hotels in this part of the world, despite having only 3½ due to the lack of facilities. Not the lack of comfort and accommodation. The staff is friendly, but as you might expect the service is a bit slow. The restaurant is quite good and reasonable priced, again compared to other Western restaurants in this part of the world. If I ever need to visit Libreville again, I would certainly look into Park Inn Libreville as my first choice. Their sister hotel, Radisson Blu would also be a candidate as it is expected to open next door in a not too distant future.