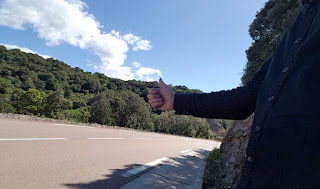 The Wildest Hitchhiking Adventure to Date
I arrived in Corsica yesterday, late afternoon after hitchhiking approximately 260 kilometres from Figari Airport in the south to Calvi in the north.

I got my first ride after about 15 minutes with Belgian tourists, followed by great conversations with Jean-Michel from the Northern France. After that mostly, local Corsicans picked me up. Corsica’s public transport is hardly existing, but I am glad hitchhiking is accepted and doable here. The last ride on a motorbike for approximately 50 kilometres with a guy from Cuba before arriving at the stunning La Villa Calvi.

On Facebook you can see photos from the beginning at Figari Airport to the end of the evening with a good meal at their La Villa Calvi’s restaurant with one Michelin star.
I have now been to all territories in Europe