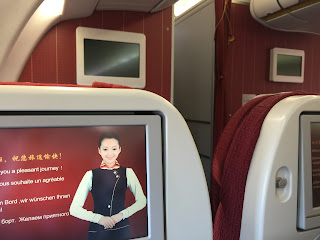 Skytrax is a United Kingdom-based airline review and ranking site, known as the most trusted in the industry. Airlines are ranked one to five stars based on tons of different criteria. Air Koryo, the national airline of North Korea is the only airline with one star, but another interesting fact is that there are only seven 5-star airlines in the world and this article is about the least known of those. Hainan Airlines. With bases on the beautiful island of Hainan and at Beijing’s capital airport, Hainan Airlines is in an excellent company with the following other 5-star airlines, Singapore Airways, Qatar Airways, Asiana Airlines, Cathay Pacific, Garuda Indonesia, and ANA. Hainan Airlines is also the latest airline to join my project of visiting all countries in the world.

Hainan Airlines sponsored my flight from Berlin to Beijing. I had a very good experience onboard with great comfort and service. I also liked the fact that I could charge my laptop onboard, which is something you can only do on very few airlines. Hainan Airlines flies to the following international destinations from Beijing: Almaty, Bangkok-Suvarnabhumi, Berlin-Tegel, Boston, Brussels, Chicago-O’Hare, Denpasar, Irkutsk, Malé, Moscow-Sheremetyevo, Phuket, Prague (begins September 23rd, 2015), San Jose (CA), Seattle, St. Petersburg, Taipei-Taoyuan, Toronto-Pearson.

Not many people know about Hainan Airlines, but it is definitely one of the best 200+ airlines I have flown and much better than any Chinese airline. I can highly recommend them and on some international routes they might even have the lowest fares.